Posted by Eddie Pasa on August 22, 2019 in Movie Reviews / No Comments

There are several irregular elements which set Mike Gan’s Burn apart from your typical bottle-episode thriller, and special consideration must be given for them. We have the self-harming misfit, an inverted sexual assault, a female anti-hero, and a robber with neither a heart of gold or murderous intent. It’s an embarrassment of riches resulting in decent unpredictability, which might be the only thing Burn truly has going for it. 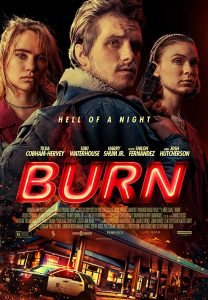 Most of it is due to Matilda (Tilda Cobham-Hervey), a gas station attendant stuck in her own mind, not abiding any kind of outside influence upon her meager attempts to fit into the world. Her working relationship with cashier Sheila (Suki Waterhouse) is antagonistic at best, with Sheila constantly haranguing Matilda for being a weirdo. When the pressure’s too much, Matilda takes to burning herself by dipping her finger in a hot coffee pot (which makes you go “Eewwwww” for the next coffee-drinking customer). She doesn’t think much of the real world and where she is, using the pain as an escape from the mundane.

Tilda Cobham-Hervey displays the awkwardness inherent in the introverted Matilda wonderfully, carving her from a brick of loneliness and social ineptitude. There’s nothing explaining why she is the way she is; we don’t know the first thing about her family life or anything else. There’s only the immediate truth that she cannot connect with her peers on any kind of common level. When people say “it’s the quiet ones you’ve gotta watch” whenever a massacre or something similar takes place, it’s Matilda’s kind of quiet they’re talking about, and Cobham-Hervey absolutely nails it. 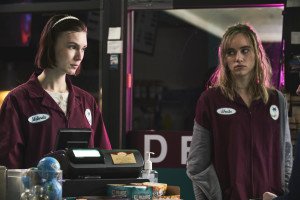 But when Billy (Josh Hutcherson) comes to call with a gun and a backpack which he wants filled with the store’s money, we discover how deep Matilda’s aversion for social norms goes. She not only helps empty the registers, she also volunteers the money from the safe and uses it to bargain her way out of the gas station to go on the run with him. She doesn’t mind when Billy yanks Sheila over the counter after losing his temper, incapable of caring about whether Sheila’s hurt or not. A chance to foil Billy results in a long look at Matilda crossing the line from sociopath to full-blown psychopath and becoming more of a villain than Billy could ever have been.

This disturbing character study is powered completely by Cobham-Hervey; it’s her world and everyone else is only visiting. Josh Hutcherson’s ambiguous Billy isn’t written with any other dynamic other than “angry and a little more.” While Hutcherson does what he can with his limited character development, it’s not enough to swing us any which way on him, and he becomes little more than Matilda’s plaything. Likewise, Suki Waterhouse can only do so much as Sheila, stocking her full of snark, sass, and a little post-teenage hypocrisy – watch how different her reactions are when she’s recording something Matilda’s doing versus seeing Matilda taking pictures of her. 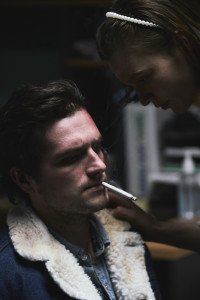 Not even the greenhorn police officer Liu (Harry Shum Jr.) is bold enough to stand out; he’s wishy-washy, with his caring face put on merely as a professional courtesy. No one’s a truly good person in this movie, which may indeed mean we’re seeing an unreliable narrator-driven fantasy with every action being parsed through Matilda’s eyes and presence. When Matilda winds up in a place to tell whatever version of the truth she wants, who knows what story she’ll spin? Her actions give us enough to help us with educated guesses, but are we even seeing the whole truth of her situation?

Burn’s saving grace is that it attempts to be a solipsistic fairy tale of a self-rescuing princess at the expense of the other characters who represent the world outside her skin. The script’s shortcomings make sense in this context, and it’s not that much of a leap to take it as such. However, when viewed as a straight-ahead thriller where everything is what it seems to be, it’s a distasteful examination of one woman’s descent into psychopathic insanity. Choosing to watch Burn as a hero-in-one’s-own-mind’s-eye film helps, but not by much.

In theaters and on VOD 8/23/19. MPAA Rating: R for language throughout, violence including a sexual assault, and some sexual references. Running time: 88 minutes. Released by Momentum Pictures.
Posted in Movie Reviews