Hellmington – stylized as HELLmington in early press materials – is a mixed bag. By no means is one to expect a well-polished indie thriller, but one also doesn’t expect the gritty story out of a low-budget affair like this. The effort put forth by fledgling filmmakers Justin Hewitt-Drakulic, Alex Lee Williams, and their entire cast and crew is certainly appreciated, but the finished product betrays ambitions greater than their capabilities. 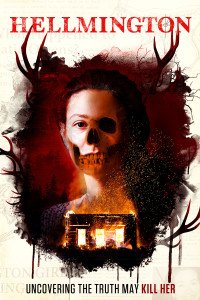 There’s a fairly compelling story with hints of the supernatural at work here, but we’re never given the full scope of this film’s inner workings. All we’re here to do is follow Samantha Woodhouse (Nicola Correia-Damude) while she investigates her father Joe’s (Andre Bussieres) dying words: “Katie Owen.” The only thing we know about Samantha to this point is that she’s lost her daughter and husband in a fire, and she’s just lost her dad as well. Her gruff uncle Rupert (Michael Ironside) – Hellmington’s sheriff – warns her against diving back into Katie’s (Angelica Stirpe) cold case, but she does so anyway. Katie disappeared nine years prior to the events of this film, so why was her name the last thing on Joe’s mind?

Did you know Samantha’s a police detective? Don’t worry about it, the audience doesn’t, either – it’s a fact left unrevealed until she shows up behind crime scene tape later in the movie. One wonders why Rupert’s subordinate Abdi Khan (Gabe Grey) so willingly hands her the casefile when her credentials haven’t been established at all to this point; an argument could be made for preferential treatment on Rupert’s behalf, but a civilian granted this kind of access to a cold case is unheard of.

Throughout the film, a spectral figure shows up just before someone dies, but no indication is made as to whether it’s corporeal or supernatural, even to the end. We’re just to accept that Samantha’s seeing strange things, possibly suffering a mental break after the trauma of losing so many family members in a relatively short period of time. However, the time elapsed between the events of the prologue and the present day is never touched upon; it could’ve been years, days, or anything in between. Also, we don’t know if her husband died in the fire or if he survived and left Samantha afterward; all we know is we don’t see him at all after the prologue. 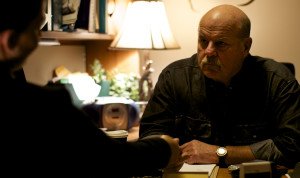 There’s entirely too much left unknown for Hellmington to be a coherent film. Not that everything needs to be spelled out explicitly with nothing left to the imagination all the time, but a little personal geography is required to fully understand the stakes and the necessity of the film itself. Hellmington maddeningly slow-rolls the viewer, doling out information only as it sees fit, never granting a wider view or fuller picture to examine in detail. Our limited comprehension straps us to Samantha’s side without seeing into her decision process or what’s driving her to investigate until the film shocks us with its revelations.

Some of these late-game reveals are truly hideous, such as a high school party gone horribly wrong and the resulting distastrous fallout. But Hewitt-Drakulic and William’s script plays it close to the vest – wait. Strike that. Saying this film “plays it close to the vest” doesn’t even begin to describe how much Hellmington withholds from the viewer. It’s a hell of a hook to hang us on, and the final act does offer some respite from the frustration of not knowing why we’re watching in the first place. But when the final curtain comes down on Samantha, we still don’t know about the nature of the visions plaguing her. Hellmington is a strong memento of the guilt which hobbles and haunts us, but our confusion is the price we pay for staying with this muddled story.

Not rated by the MPAA (contains language, violence, drug use, nudity, and a rape). Running time: 82 minutes. Released by Uncork’d Entertainment.
Posted in Movie Reviews