Posted by Eddie Pasa on September 13, 2019 in Movie Reviews / No Comments

(DC-area readers: this film will be playing at the Alamo Drafthouse at One Loudoun starting on October 2, 2019. Make every effort to see this during its engagement.)

Every now and again, you run into a movie which reminds you that things are okay with the world, people’s hearts are usually in the right place, and obstacles can be conquered with help from your friends and a good mindset. Oddly enough, this movie comes in the form of a Brechtian zombie story, One Cut of the Dead. Made on a shoestring budget of the equivalent of $25,000, One Cut of the Dead (Japanese title: Kamera o tomeru na!) has more personality and goodwill than most modern-day films with a budget 10,000 times larger. 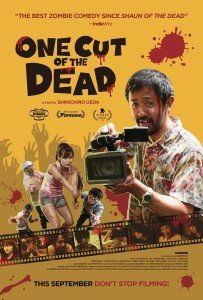 A zombie movie? you might be asking, especially in light of all the foregoing happiness. Yessir, a zombie movie, shot and shown in one long take with no edits – hence, the “one cut” of the title. The film starts with a bloody zombie, arms outstretched, staring straight down the barrel of the camera, shambling toward his intended lunch – the woman who loves him. When the inevitable sadly occurs, we’re suddenly jolted out of it by a “CUT!” from offscreen, revealing a very remote film location where frustrated director Takayuki Higurashi (Takayuki Hamatsu) is about to browbeat his actors for not performing how he wants.

Thus starts our one-take film, culminating in Takayuki crazily ordering the behind-the-scenes cameraman to keep filming as real-life zombies start attacking the crew and the actors. And when the final camera position is taken, credits roll, the screen fades to white… and we’re only 37 minutes in.
You read that right.
When the screen fades back in on a shot of a city skyline, we see “One Month Ago” float across the screen, and we’re shown how the director, actors, and crew came to be in these circumstances. 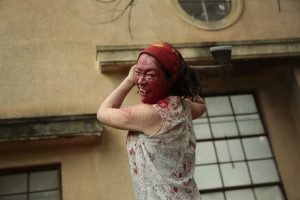 The director has a fair and self-deprecating disposition, quite a contrast to angry, deranged man we meet at the top of the film. His wife Harumi (Harumi Shuhama – sensing a pattern here?) has retired from acting, and their daughter Mao (named for the actor herself) headstrong and stiff attitude is getting her into trouble. An offer to direct a first-of-its-kind one-take short film broadcast live over a horror TV channel could bring the family together during this quiet tumult. So begins the process of casting, rehearsing, and prepping for this incredible feat, where we meet the film’s leads, sparkly ingenue Aika Matsumoto (Yuzuki Akiyama) and self-obsessed hunk Kazuaki Kamiya (Kazuaki Nagaya).

One Cut of the Dead comes off so earnest and enthusiastic about its purpose, and it’s hard not to fall in love with its charms and quirks. Each cast or crew member hired is endlessly endearing – even the too-cool-for-school Kazuaki – with only a little development fully seating our characters firmly before the film takes us on a comedic ride through the making of a horror movie. This film reads like a perfect blend of the best of Tom DiCillo’s comedy Living in Oblivion and zombie godfather George A. Romero’s Diary of the Dead, both being about film shoots gone awry. Closer to the end of the film, it goes a little by the way of This Is Spinal Tap – meaning it goes through hell to get to your heart. 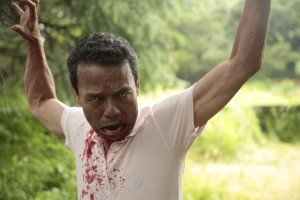 And get to your heart this film does, sporting endless energy and the kind of humor which comes back to bite you in such terrific, touching ways. If it feels like I’m not telling you something, that’s because I’m decidedly not and I’m already kicking myself for saying this much about the movie. The film plays with horror and comedy conventions to the point where One Cut of the Dead is actually three films: horror, documentary, and comedy. Not all at once, mind you; you’ll know exactly when each genre gets its turn to be toyed with, and it’s an absolute delight to witness each portion set itself up, only to (sometimes literally) knock it down with unabashed glee. Undoubtedly one of the best films of the year, One Cut of the Dead serves up copious helpings of fun, laughs, and heart… with a small side of gore.

Special thanks to Jeffrey Lyles, owner and operator of Lyles Movie Files.